1. Punching Above Our Weight, But

Our girls got a right, royal 8-0 hammering on Tuesday in Spain.
We are ranked 22nd in the world and Spain are 10th.

In the aftermath the match stats were depressing.
We had just 21% of the possession, made 199 passes with only 56% pass-accuracy and had 1 shot on target.
Their senoritas made 714 passes with 87% pass-accuracy, had 18 shots on target and 8 goals.

Our girls are still on course for a play-off spot but the match showed there is a gulf between us and the top countries.
That got me thinking about which countries out there are doing it best and if there are learnings for us.

My starting point was to compare the current Fifa rankings against current country population rankings as a rough insight.

The numbers do indeed confirm that Scotland women’s football is indeed well above our population ranking based on the wonderful achievements of the last few years.
We kind of knew that and that is good.
We have come a long way in a very short space of time.

But if we look at Iceland, Norway, Denmark, Sweden, and Canada you might think we could have done even better as a sport and more importantly as a forward thinking community.

Questions Abound, BUT I don’t know if anyone is asking them or if any planning is in place to move us upwards.

In particular – what are these other countries doing that eventually brings in better elite teams?
Especially the smaller countries.

Believe it or not the answer is not rocket science.

It is Grass Roots football.

Scotland is not particularly good at grass roots football.
That is because our clubs are not sure it helps them in the short term and it is the short term in which they live.

Adding to that is our current, dreadfully-low schools sports participation.
Since our teachers’ drawn-out pay dispute with the government in the late 70s and early 80s Scottish sport has been hampered by a continuing disconnect between the kids’ game and our schools.
It was our huge, hidden strength and player factory and just stopped.

It is still an open national sore, and a glaring, still repeated, missed opportunity.

It damaged our game.
There was a time lag, but the effects of school teachers from Wick to Stranraer boycotting schools football consigned us to the football wilderness for a long time.

Fair play, the wonderful community clubs all over the country have partly filled the gap with volunteers behind the scenes doing an amazing job, but ‘no schools sport’ is such a stupid own goal.

It has never been addressed, round a table, by people who can see what it offers us all, and who are in a position to agree to override the madness that is our status quo and find a new path.

And yes, the girls’ game didn’t really exist in the 80s, but it is actually amazing we’re doing so well without a fully integrated schools, local clubs, and elite sport structure.

I had an email from Sarah this morning likening ‘our collective approach on girls and women’s soccer to the power-line network, patch-worked over the years, by Hydro Electric, now SSE, ahead of Storm Arwen.

‘Andy, when it works, we just about get by, but any storm or problem and we lose people.
We need to think bigger and better.

We need Money, Proper Resourcing and Working to a Vision with real Long Term Commitment.

Sarah is right but football won’t and can’t do that on its own because football at the top wants all the money, and it is grabbing it as I write.
The Womens’ game is simply mirroring the Mens,’ just because they can.

Without genuine, common-good collaboration between Government, Women’s Sport, Clubs and Communities we’ll get by, but we’ll be left behind.

I totally agree with Sarah.
Our biggest problem is getting some big and clear thinking in place.
And big thinking and real action not just words.

It’s a community and attitudinal thing and that is where the Scandi countries get it so much better than we do, and where all the Canadian and American ‘soccer-moms’ don’t realise it but they are paving the way for international success.

And having healthier and happier kids too.

A strong grassroots girls’ game is no guarantee of future international successes, but it gives us a shot at improvement and the by-products are good for us all.

But this issue is bigger than just the girl’s game it encapsulates the biggest issues in male football too.

2. All Kids Sport Should be Free

When I was a kid in the 60s and early 70s, football was free.
My first competitive fixtures were in the Inverness Street League.
It was an under 12s league set up by Alex and Marion Urquhart.
They were the parents of one of founder member team, Loch Broom United’s players.

Loch Broom United got fed up playing their close Lochardil neighbours, Oak United, every week, and by street level osmosis, about 8 previously non-existant clubs came into being overnight and entered that first year.
My local area had no entrant so I created one.
Dalneigh Dynamos was formed.
We won the league and the cup.
We had no manager, no coach, no weekly or monthly subs, and no strips at first.

All games were played at the town’s Bught Park for free and were reported in the local paper.

We all just turned up after school and played on the grass.

We didn’t need nets and had volunteer refs.

There were no crowds, in those days parents didn’t come along.

The Cup Final was played at Clach’s Grant Street Park and their Chairman, George Rodgers, presented a silver trophy to Andy Kerr our Captain.
A beautiful cup that had originally been awarded for ‘Ploughing in Caithness’.
We didn’t mind and the picture will be in the Highland News archive.

Fast forward 50 odd years and our world is different.
It is not so simple and there are more rules and clearances that have to be factored in.

But the principal remains that kids sport is good for the communities and should be free.

And why are parks taken down in summer when kids want to play?

Grass Roots football for boys and girls of all ages needs a deep, comprehensive, and long-term review.
It should be more inclusive and integrated into a long term health and mental wellbeing plan.

And wherever we end up, there should also be no costs for registration, or charges by the SYFA just for kids to play.
And the SFA/SYFA kids department should be upgraded to get schools playing again too.

Yes local volunteers will be needed – but if we paint the scene they will come.

How do we get this to happen?

It will take a grass roots and political movement because the game, as currently run, is incapable of seeing the bigger picture.
It is not fair to blame the Clubs even if they are an easy target.
They have enough trouble surviving and that makes them live in the ultra-short term in their thinking and actions.

Is it fair to blame our administrators?
Probably not.
They have enough to do, just doing what they are doing. (Whatever that is they do).
And they do it in an ultra-short term world.

The solution will have to be political with fans are part of this movement and common good at the centre of it all.

When the grass roots is healthy our international teams will benefit.

3. More Stuff on Our Pariah Host

Qatar Airways are on Bayern’s shirts and some fans are unhappy with that.
That seems fair enough.

The directors had recently tried to address these concerns citing the benefits of ‘commercial’ reasons.

The fans thought ‘Nagumbi’ and raised a member’s motion on the sponsorship for a full and frank discussion at the recent club AGM.

In a parallel to the ongoing Resolution 12 farce at Celtic, the Bayern Munich blazers also totally ignored the feelings on the floor and closed the meeting early to avoid engaging with their very stakeholders.
(Maybe they had been inspired by Celtic Chairman Ian Bankier’s ‘textbook’ dealing with his fans over the last few years, maybe not).

It wasn’t the smartest thing to do in a fan-owned club because the problem will just fester and come back voraciously.

Meanwhile in sunny Qatar, a wee country that “allegedly” bribed many Fifa delegates to be awarded the World Cup, and a place we are striving to reach in less than a year, the pesky press are causing problems again.

A third Norwegian journalist Havard Maelnes was ‘treated’ to 24 hours in solitary confinement this week.

His crime was to have an altercation with a local ‘person of importance’ (poi) but not named.
The journo was leaving his hotel when he came across this ‘poi’ Qatari fellow ‘overtly scolding’ two hotel employees who were carrying his ample suitcases.

Asking him to ‘take it easy’ with the bell hops didn’t hit the spot.

No, the Qatari chap got on his phone and within minutes Havard, the Norwegian journo, was sitting in a police car, handcuffed and en-route to 24 in the Qatari Polis’s tank.

4. A Very Different League Table in the Scramble for £30Million Pound Notes?

Hopefully our champions will go straight into the next year’s Champions’ League group stages with serious guaranteed income from those nice folks at Uefa to help the big clubs constantly get bigger.

This kind of revenue really is a big deal and could be a game changer for all three of our current aspirants.
So important that everyone is talking about it already.
Most fans know that their club is not in the running and if pushed just want it all to be exciting and fair.

One site however thinks there is a long term issue in our game of ‘Honest Mistakes’ and has set up an interesting season-long review.

They have sent for t’Yorkshire ref.

He is independent and has no skin in our game. 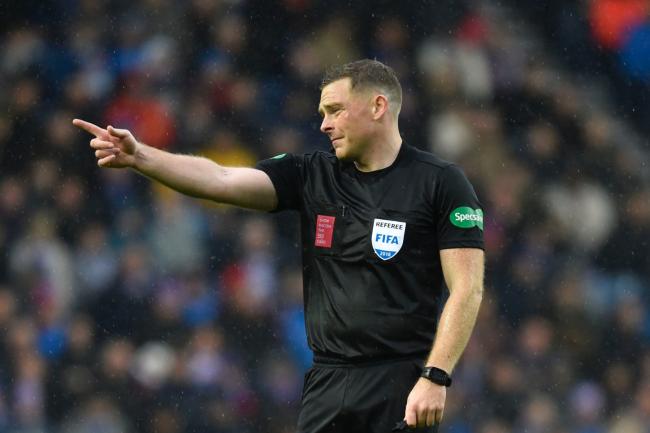 An ex English Premier League whistler, he is being used by ‘celticbynumbers’ to look across the season at key occasions, aka (in the past) ‘honest Mistakes’ affecting all games and the impact they have on points accrued and indeed access to the Champions League riches.

It is a great site and a wonderful cross-season insight.

At the end of November the Celtic running total is they are minus 1.73 points and the Rangers score is plus 2.2 points.

There is a long time to go and you would hope that luck usually evens out over the long term, but the absence of any ‘Honest Mistakes’  would have seen a tie at the top of our current standings rather than the 4 point advantage to the Govan side.

Of course that can all change and we’ll revisit and report back at the end of December and as the season progresses monthly.