In a week where English clubs have demonstrated the dominance money brings after grabbing 3 out of 4 European final places we concentrate on matters nearer home where money still dictates, just less of it.

This week the news broke that The Lowland League had ‘approached’ Celtic and Rangers and invited them to enter their ‘Colts’ teams into their league for one year initially.
George Fraser, the Lowland League Chairman was quoted in his press release saying, “It was absolutely clear to me that there is a major gap in the player pathway which would, if not addressed impact a generation of our best young talent. The Lowland League as a modern progressive organisation is open to embracing positive change with massive benefits for our clubs, our league and the wider Scottish game. The pyramid will be unaffected by this plan”.
A sum of £50,000 was mentioned by some of the press to grease the necessary wheels.

Who Has Hijacked the Lowland League Board?

If George and his Lowland League board think increasing its numbers is a good thing to do then they have plenty teams wanting to do it the fair way.
The Lowland League has 5 feeder leagues with 179 members aspiring to move upwards.
Therefore it will not be difficult to find and promote new members on merit.
But trying to justify this almost certainly financially driven motive by saying ‘it is for the good of the game’ is simply a slap in the face for the Lowland League’s pyramid feeder clubs.

It’s not good for them in the way last years SPFL decision to dump the pyramid wasn’t good for Brora, Kelty and the pyramid.

This move didn’t just happen either and the ‘good for game’ justificational press release points to some kind of coordination probably from above and with roots in Glasgow.

I’d be inclined to think it has been ‘managed’.

And as we all know in football money talks.

Well an equal split of the £50K between all members affected would give each member club £255.10.
Not game changing to any of the clubs.
Not enough for a fish supper each for everyone on the bus after a post-Covid away cup tie.

A few seasons back Hibs Colts played in the East of Scotland League. I don’t know why they pulled out but from memory think it was just the sheer number of games when combined with their under 20s commitments.
Hibs colts had effectively entered at the bottom of the available pyramid.

That is a precedent and the level where any Colts or indeed club sides should start their journey.
George has called this one wrong and I hope his clubs tell him that.

There is agreement among those who know, people like John Collins and Shaun Moloney and feel strongly about developing elite talent that the under 20 ‘revolution’ of a few years ago hasn’t delivered what was promised and worse than that is not fit for purpose.
This thinking applies to both the boys and girls game.

Rangers and Celtic current thinking seems to be that a ‘silver bullet’ exists.
Their identified ‘panacea’ is bankrolling their Colts teams to play in the SPFL against men rather than other under 20s sides.
A simple and effective solution and both clubs quote some other leagues as proof that it works elsewhere.

I respectfully disagree and don’t think it is either simple or fixable just by having two colts teams playing Stenhousemuir or East Kilbride rather than other under 20s sides.

I’ve read arguments for and against and think this is a huge problem.
One that needs the whole game getting behind it.
We need proper joined-up youth development thinking and a well-funded strategy not a knee jerk reaction or big club power plays.
I’m not sure why we keep getting it wrong. I don’t know if the SFA are letting the clubs down or if the clubs keep letting themselves down but there is no doubt we have not been good recently at finding the best kids and then getting the best out of them.
We’ve tried a few times to come up with a winning strategy and gone though some motions.

The McLeish 2 report 10 years ago majored on youth development but has been ignored/parked in the Hampden long grass since.

We’ve all seen the heralded arrivals and less public departures of Mark Wotte, Brian McLair, Malky Mackay and their teams
Something has been missing all along and even as I write the SFA are quietly reducing the funding for elite academies.

I suspect the two Glasgow giants desire for Colts in SPFL2 is as much a criticism of the current set as a ‘proven elsewhere’ off-the-shelf solution.
It is almost certainly a genuine cry for help.
Both clubs should be listened to and the other teams should be involved too. Change is needed and for the common good.

But we don’t need knee jerk reactions and certainly not when it destroys fair governance principles. 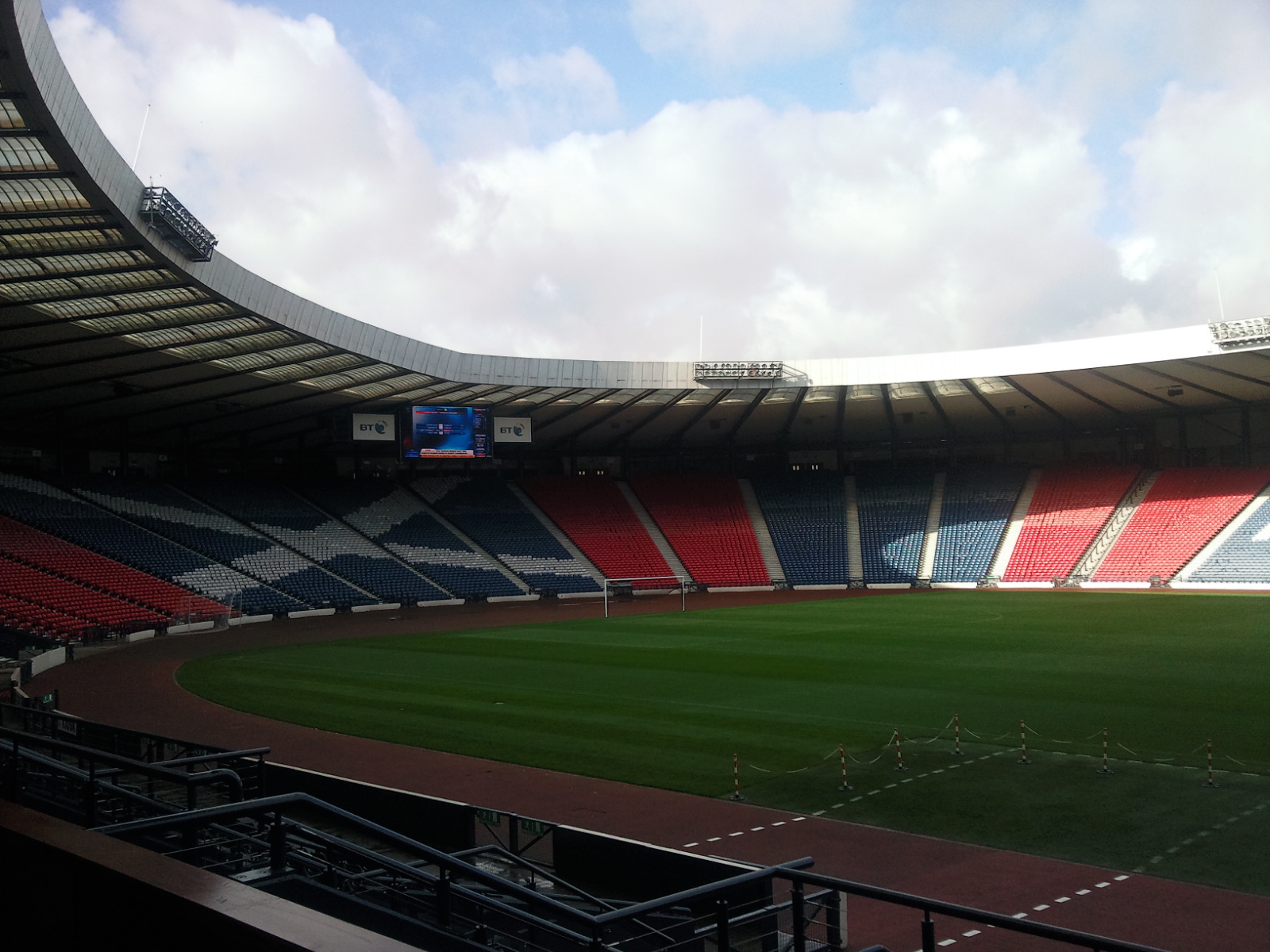 The empty Scottish Cup Final has dominated my inbox this week.

That is a good question and I have no real idea because what has been used as an excuse is almost certainly not the reason for 51,866 empty seats at our flagship match.

Why are our journalists not on the phone to Uefa’s Sandy Ceferin in Switzerland asking why he has been painted as the villain stopping it all happening?
Surely also he wants a dummy run before June 14th?

Here are some recent UK attendances to think about.
The Caraboa Cup final on April 25th at Wembley had 8,000.
The recent FA Cup semi finals had 4,000 fans and the FA final between Leicester and Chelsea next weekend will have 21,000.
Even the Snooker final, indoors, at the Crucible had 980 and 6,000 kids were clubbing last weekend indoors in Liverpool.

With just 2 weeks to go it’s certainly the 11th hour but is not too late for sense to prevail.

Scottish football needs someone to bang heads together and for sense to break out.

This week saw three interesting and quite different shirt sponsors that got me thinking.

Ed Sheerin will feature a yet to be explained logo on Ipswich men’s and women’s strips and at the launch said, “The football club is a big part of the local community and this is my way of showing support”.

Spur’s Harry Kane extended his unique shirt sponsorship at Leyton Orient, the club where he started.
On the home shirt he agreed a ‘Thank you’ message to frontline Covid workers.
The away shirt featured Haven House Children’s Hospice and the third kit carried mental health charity Mind.

Further up north Rangers announced a ‘multi season’* extension to their link with the Kindred Group that will see 32 Red stay on their home and away shirts and Unibet its sister company on all its European shirts.
Neil Banbury Kindred Group UK boss felt it appropriate to make a big statement, way bigger than you might expect on a run of the mill sponsorship renewal.
“We remain committed to reinventing the sports sponsorship model so it benefits the wider community and we will be renewing our support for a mental health initiative, Team Talk”.

I hadn’t heard of Team Talk so googled it.

There are a few Team Talks.
I found Team Talk, an Internet conferencing system.
Also TEAMtalk, a football transfer gossip, rumours, and breaking news from Leeds.
And Team Talk is also on BFBS radio wherever that plays.
Finally I googled Team Talk along with Rangers and found it on their Charity Foundation site.

It is a men’s mental health initiative that uses the club and its staff to engage with men about mental well being.

The recent Westminster 16 week call for evidence about gambling and the damage it causes closed on March 31st.
If you dig a little you find out that betting companies are worried that new legislation will curb their activities.
It is no secret that they are using football to recruit new users at home and across the globe especially in China where betting doesn’t exist.
It is also well known that while most consumers can control their betting there is a significant percentage who can’t.
The hi-tech betting industry is known to be causing significant long-term damage to a significant number of people.

To try and cover their tracks we are now seeing initiatives like Team Talk in conjunction with the Rangers Charity Foundation.
I have nothing but admiration for this kind of initiative from the club but I see the funding as ‘conscience assuaging’ by a damaging industry.
The hard fact and contradiction here is Rangers Team Talk is helping their supporters while at the same time their shirt sponsor is damaging them.
It’s time football woke up.

*Changes are said to be afoot with a much-discussed ban of betting firms possible on shirts and tournament sponsorships. That may happen but so far the mostly offshored gambling industry has run rings round the legislators.

As always thanks for the feedback, and feel free to drop me a line about anything football related.