1. Somehow a ‘Sitter’ Turned Into 4 Own Goals

What a strange week and no I’m not talking about Boris or Novak.
Good news, bad news, action and inaction has abounded.

It was Nicola’s announcement of an unrestricted return of Scottish fans from Monday, 17th.
That allowed the limit to rocket from 500 to 60,000 with a capacity crowd headed for Celtic Park and the visit of Hibs.
The next day a full, unrestricted Premier card.
A confirmation of the wisdom of bringing forward the Scottish Premier League’s winter break.

Yes clubs will have pressure managing the increased vaccination apps and test protocols in the dark, but that is something they will all accept as better than what it might have been.

The end of the restrictions was no real surprise.

Everyone and his granny knew it was imminent from the constant ‘unattributed’ press briefings appearing first in the red tops in the middle of the week before.

The facts will show the deadline day set for an announcement was Tuesday 11th, 6 days before the end of Nicola’s three week, 500 limit, which had been implemented from Boxing Day.
An announcement was always scheduled to be made.

The facts will also show that three weeks on, Omicron science was suggesting that Scotland’s more prudent approach to crowd control was not making any measurable difference when compared to England where there were no similar crowd limitations.

Some scientists were also now looking ahead and suggesting that the Omicron variant, and how we have to deal with it, was becoming more endemic that pandemic.

The Monday night before Nicola’s much anticipated and much leaked announcements we were invited guests on John Beattie’s Drivetime show.
Based on the research we’ve already undertaken with our members we said that our overwhelming requirement was always safety but that there was enough evidence to suggest that the much heralded return was likely, based on the updated science.

Drivetime – with John Beattie – BBC Sounds (18:00)
I also raised the issue that there were games this weekend below the Premier League where clubs would welcome the chance to have fans back.

But pre-announcement we were all hopeful and upbeat.

As suspected Nicola confirmed the plan to move back to capacity crowds on 17th January and cheers broke out all round Scotland and rightly so.

But was she missing a trick?

There is a full sporting card for all Scotland’s lower leagues this weekend.
With the science moving on surely there was some flexibility.

There was and is as far as we know no scientific reason why Monday 17th was a safer day or date to return than Friday 14th, when as it happens Partick play Killie in a top of the table clash.

My overwhelming feeling was that with a little thought, and a grown up discussion, Scottish Football and the Scottish Government could have made a better mutual choice.

Why Were Fans and Smaller Clubs Not Considered in the Ongoing Dialogue?

We all know discussions were happening between the Scottish Government and Scottish Football’s Pandemic love child, the JRG.

The fact that none of the multitude of discussions that have happened are available for scrutiny by voters and fans is a very real issue for another day.

Reassuringly we weren’t the only ones to spot the missed opportunity.

Stephen McGowan at the Scottish Daily Mail got on the case too and we thank him for that.

So we issued a statement to the media and on our site and social media flagging the issue, the opportunity and asking for a 3 Day Shift forward in the plan to allow crowds over 500 from the 14th.

We explained how an early return would allow Ayr, Dunfermline, Caley, Raith, Airdrie, Dumbarton and many more to welcome their full fan communities back with obvious financial benefits to the clubs and their heartlands.

We started a one question, Twitter fan poll, and also had great discussions with Cathy at Kilmarnock and Jaqui at Partick who should have been playing tonight’s televised game in front of 4000 plus.

This was an ‘open goal that even Chris Ivelumo would have netted.’ 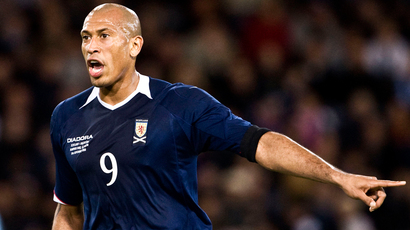 Fundamentally this was a subject that should have been identified, discussed, and approved last week ahead of our First Minister standing up.

It was a rare thing in Scottish sport and politics, – a move with no downside.

So why in all the discussions had nobody thought it through?

Our proposals got great cover in the press, on local radio and on Good Morning Scotland with Phil.

But nothing happened.
There was no reaction from anyone who could do something to change it.
No contact.
No common sense to this obvious tweak.

It seemed such an obvious change to make and we didn’t want to drop it.

So, If At First You Don’t Succeed…

On Wednesday morning social media was reflecting huge support for us and also Partick and Killie and our simple poll was showing 90% of fans backed the idea of a Friday start.

So we had one last go even if we thought it would probably go nowhere.

Our ‘Win Win’ notification for, and direct to ,The Scottish Government was written and sent to all cabinet members.

It soon morphed into a new football cliché.

4 Easy Wins
– A  Good news ‘Win’ for the Scottish Government.
– A ‘Win’ for the clubs being able to welcome all their season book holders and walk ups too.

– A ‘Win’ for fans who would not be excluded from games they had already paid to watch.

–  And a ‘Win’ for heartland communities with the multiplier effects of fans and their spend returning.

Yesterday there was an announcement that the Scottish Government are providing compensatory funding to help clubs through this last 3 weeks.
That is good and appreciated BUT.

Our 3 day ‘Bring it Forward’ proposal would have reduced the compensation amount required by cutting out this weekend’s allocation.

A hard fact is moving the end to crowd limits by three days would have saved taxpayers money.

‘SFSA Save Taxpayers Money’. – Now that would have been a great headline.

That is the biggest nonsense of how the machine works when rapid change is needed.

When I heard the leaks for a 17th January full return of crowds we should have been on the case and flagged up the ‘three day early’ message for lower level football and fans to those who didn’t fully think this through.

I didn’t jump up and down and make a fuss till it was the 11th hour.

We were too late.

2. Learnings for Scottish Football Governance from Down Under

The current Australian Open Champion will be heading home soon, probably with a 3 year entry ban and after a final appeal. His lawyers said the decision taken is ‘patently irrational’.

Immigration Minister Alex Hawke meanwhile said ‘it is in the public interest’.
Prime Minister Scott Morrison said ‘Australians have made many sacrifices during this pandemic, and they rightly expect the result of those sacrifices to be protected’.

Questions will now be asked about how Tennis Australia Ltd approved his initial clearance.

To watchers from afar it looks like the same rules for all without fear or favour.

What’s the point of rules if they only apply to some.

Maybe Boris is thinking about that too?

Meanwhile up here we have the same BBC and ITV’s franchise holder Scottish.

Our coverage doesn’t look like its on the same planet.

Could we ever have delivered such a feast and if not, why not?

After a bizarre end to the game between Mali and Tunisia, which Mali won 1-0, Zambian referee, Janny Sikazwe, was quoted all over the world saying ‘It wisnae my fault. I bought the watch, mail order from the Barras and was told that it was a Rolex’.
(Ok he didn’t say any of that but the first ref I ever played a game under was a janny too.)

In an incident packed second half, Janny the Zambian ref gave two penalties, one which he’d failed to spot until VAR intervention.
One penalty was scored by Mali one missed by Tunisia, hence the 1-0 final score.

In a rather unique ending Janny’s troubles started when he blew for for full time at 85 just minutes.

The Tunisian officials brought this early closure to his attention rather vociferously and the game was restarted.
Janny then sent off Mali’s El Bilal Toure after what should have at best a possible yellow.

And with 11 seconds still left on the clock he again blew for full time with no allowance for all the time wasted on VAR reviews and penalties.

Complaints aplenty and then 20 minutes after the game the Mali press conference was interrupted by AFCON officials implying that the game would have to restart to play its final few minutes.

So fully 40 minutes after the second final whistle the Mali players appeared on the park but the Tunisian players were in no position to continue. Bemused Tunisia coach Mondher Kebaier said ‘The ref blew for full time, asked us to go to the dressing room, players were in ice baths and then he asked us to come back out’.

Cue a fuss from the Tunisians who have asked for a replay but been told no and the result will stand.

5. The Appliance of Borderline Science

Chester City play in the 6th tier of the English Leagues but while their front door is in England most of their park is in Wales.
The English club famous in quizzes for questions like ‘Which ground do you get changed in one country then play in another’ has welcomed proper festive crowds till last week a wee jobsworth from the Welsh Government told them to stop.
Chester said ‘We play in the English League, We are members of the English Football Association, We’re subject to English governance and policing and we don’t need this nonsense’.
The jobsworth’s response was ‘Chester’s stadium is in Wales and therefore Welsh regulations apply with a 50 Spectator maximum.

Chester have thus decided to postpone this weekend’s game and hope clarity if this ever happens again will not cost them dear in legal bills.

Welsh crowds are now allowed from next weekend so the problem has abated for a while.

Rory Smith of the New York Times writes this week that Oswestry, an English club who play in the Welsh Premier League have been subject to the same Welsh restrictions, unlike Berwick Rangers of Scotland’s Lowland League who could have been welcoming crowds of whatever numbers Shielfield could hold.

Because the Saudis are Sportswashing, big time, and agreed to pay $131Million over three years for the privilege.

Players and fans all over Spain are rightly unhappy and just this week, Raul Garcia the articulate Athletic Bilbao midfielder spoke out.
‘We are playing a tournament normally played in our country and this doesn’t make sense. Football has changed in the sense that nobody thinks about the fans. All that matters is money, getting sponsors, and we are forgetting the basics of what football is. The atmosphere, families enjoying games together, kick off times that suit spectators’.

Jorge Bonito, a Real Fan said, ’The clue is in the name. It is the Spanish Super Cup. It has nothing to do with Saudi Arabia and should be played in Spain’.

The final is between Real and Athletic Bilbao on Sunday night at 6.30 our time on BT Sport who picked it up cheap at the last minute.

The vard is out that the SPFL 42 club ballot on VAR has been put back because more information has to be provided to clubs ahead of the scheduled vote.
The clubs, the refs and the SFA/SPFL  are said to be in favour.
The supporters are said to have concerns.

That surprised me.
Not the fact that supporters might have concerns.

When did the SFA/SPFL ever ask the fans about anything?