1. It Takes More than Three Households to fill Ibrox, Hampden, and Celtic Park

We’ve had many new normals in the Covid rollercoaster, but it seems Omicron is on the rampage.

We’re desperately short of science for now. though

We do know transmission is an issue but that two jags and a booster make a difference.
There is still a lack of certainty about Omicron’s impact on hospital admissions and critical care.

For now, the emotional pressures of the Christmas period are coming hurtling down the tracks and family gatherings seem politically sacrosanct at both Westminster and Holyrood.
That has given us a window of quasi-normality except that it is not normal.

As of now Scottish fans are being bombarded with conflicting messages, requests, realities and choices.

Fans were already spooked enough by it all to the extent that some clubs report 30% of season book holders are not even attending matches.

And this week’s advice, but not mandate, to restrict our lives to 3 households is deeply confusing and incompatible with the choices many fans have to make right now.

How does the ‘three houses’ instruction sit with major sporting events like ‘40,000-plus’ SPL matches or the League Cup final at Hampden this Sunday, with 54,000 tickets sold.

How does it sit with crowded trains from Embra to Queen Street? 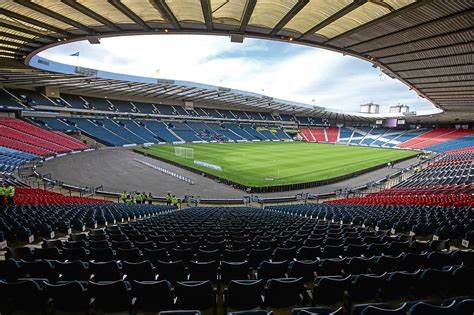 The question nobody in football wants to ask has to be asked and I’m asking it now.

‘If fans really are at risk of severe illness by attending we really need the health professionals to let us know.
The cup final and derbies, and Xmas dinner with Granny are imminent’.

Sunday’s final is only a week before family gatherings with elder family, and others at risk.

We all want the matches to go ahead but fans and their lives are more important than cup final pay-per-view tv contracts or revenue to the SFA from corporate entertainment and Xmas pies.

It is a hard call and has to be based on real science but it has to be made and right now it is being dodged and it’s not fair to dump it on to the fans.
Of course we all want football to continue.

Disturbingly, Scottish Football’s very own ultra-secretive Joint Response Group don’t seem to know any more than the rest of us.
With no public records they are above any scrutiny and that is disturbing given they have constant government contact.
It should all be in the public domain.
Why not guys?

And please, don’t ask Motherwell about how many cars it takes to get to Celtic Park for a Sunday game?
A football joke already, the answer, courtesy of the JRG advice, is 35.

But Jason says the bus was a better option.

The JRG initiative where football ‘allegedly works together’ is however the way forward.

And not just for Covid matters.

Scottish Football needs to work together more and to embrace genuine input from outside the current club self-interest-dominated world.
Because of that we are stuck in ever- decreasing circles.

More JRG type activity more often would be a big change and I’m not sure it can come from within.

But Scottish football really needs a Joint Response Group mentality to address many issues and bring new talent in.

However this particular JRG and its closed-doors operational policies is not the model going forward.

Just think what a power for good a real JRG firing on all cylinders could have been for the last 22 months when change was constantly in the air and people were amenable to a brighter future.

2. Santa is Real and Works in Mysterious Ways

One of the stories this week across the international press was an Italian bishop telling kids that Santa Claus, as we know him, is the fabrication of a coca cola ad campaign from the 1920s and 30s and is therefore not ‘real’.

He is in part correct.

Coke turned ‘Santa’ from a green-jacketed elf into a rotund, red-suited deliverer of dreams and wishes and, kind folks that those marketing people at coke are, they gave him to us all.

I know for a fact that a letter to Santa delivers.

It doesn’t actually matter how but it does time and time again.

So, as we head for the winter solstice, and for the shortest day as a rule we feel more amenable to goodwill and positive resolutions as we crave the return of the light.

So it’s not a bad time to share a few ‘wee things on my list’ in my 2021 letter to Santa, for the better of Scottish football.

(As in life they are all interrelated and sometimes more complex than they seem).

(Let me explain before I start that Santa is a magical combination of all those who can actually make a difference and actually set in train the processes to address stuff we all want.
That includes the SFA, the SPFL, the Scottish and Westminster Governments, local councils, various quangos and NGOs, the clubs from the smallest to the largest and the fans.

It’s almost certain that no one has ever sought real and genuine collaboration for the common good before.
It really is that simple.

We are happy to be the catalyst.
The magic is in the ‘almost unheard of’ working-together modus operandi.

And if I was still writing advertising slogans I’d say ‘Making a difference is everybody’s job’.

So here we go.

Scotland’s men to qualify for Qatar 2022, and our women to secure 2nd spot at worst and work towards Australia and New Zealand in 2023.

Larger Leagues than the 10 and 12 clubs models, for the sake of clubs’ stability, their financial plans and fans.

The wee countries uniting and standing up to Uefa and Fifa and their constant dominance and favour awarded to the big 5 nations and their clubs seeking ever bigger percentages of the monies.

Summer football as genuinely part of our game.

Total transparency in football governance with everything in the public domain and an end to old boy’s club networks and Victorian progression-paths to power.

A deep fan focus right through the game with a two-way Fans Charter, i.e.  how fans behave and how they get treated.

A proper pyramid with regionality.

Constant grass roots, boys and girls, investment in a new joint model with the Scottish Government and local authorities.

A world class elite programme that also inherently supports those kids who don’t make it.

Free football for all kids.

Less pay-per-view matches and none for the national sides games.

Yours aye in hope

PS I’ll leave the usual dram of 10 year old Ardbeg, some shortbread and carrots for Rudolf and his pals on the mantelpiece.

Yes this is part of the stuff in my letter to Santa but like every request we need to get publicity and to oil the wheels.

In case you didn’t know, and why would you, every time a team registered with the SYFA (Scottish Youth Football Association) plays a friendly they have to pay not just the local authority for the privilege of playing on a park jointly owned by their parents, as council taxpayers, but also £10 to the SYFA an affiliate of the SFA.

Doesn’t sound a lot but if you are a club with 1000 kids and maybe 100 teams it adds up and parents have to pay.

I think they (the SYFA) only get away with this nonsense because nobody has made a fuss before.

Well we’re now making a fuss and we’re not going to go away.

And this week, following on from my last two ‘Stings’ where I’ve said that all football should be free for kids to incredible feedback, we’re starting a campaign to make the needed fuss and change to this errant stupidity and collective myopia.

We’re copying what the big guys do too and here is our press release in full because we’ve taken this story to the media.
Big thanks to John Collins for being our selfless frontman and Henry McLeish and Fergus Reid for caring so much too on behalf of millions of kids present and future.

Please help us and share this everywhere.
I don’t think we are asking for nearly enough.
Write to your MSP your MP and your local councillors.
Why should all kids football not be free?

SFSA CALLS FOR THE END OF THE ‘YOUTH FOOTBALL TAX’

As Scotland continues to deal with the health and wellbeing impact of lockdown, the Scottish Football Supporters Association (SFSA) is calling on help for the game’s first line of defence: grassroots football. The Association which already represents 76,000 fans has launched a Grassroots Membership criteria for amateur and youth football teams across the county. The move comes as a survey showed that many youth football clubs are struggling to cope under the financial pressure of paying for local authority pitches and the administrative burden of paying the punitive cost of £10 charged by the Scottish Youth Football Association for each friendly game arranged.

Against this backdrop, the SFSA is calling on for the £10 ‘Youth Football Tax’ to be scrapped and as we look towards 2022 each grassroots football team to be awarded at least one hour of free training time on local authority pitches.

Henry McLeish,  of the SFSA commented: “Young people having borne so much of the impact of Covid. They were robbed of physical activity and education which has exacerbated our country’s mental health crises. The job of a young football coach is difficult enough. Balancing administration duties; finding facilities; keeping parents happy; sourcing kits while also coaching the kids all on volunteer time is tricky enough. But add in the financial burden of finding the money to pay a random tax for friendly matches, above and beyond existing fees to join The Scottish Youth Football Association, and we’re hurting not helping our young players.

We’re calling on all grassroots teams to join the SSFA now, for free, and help us to lobby to remove this fee and also to call for ‘free football facilities’. Grassroots football is a unique and powerful ‘force for good’ in difficult times. Let’s help it to help us all.”

Fergus Reid, Board Member representing of Grassroots at the SSFA commented: “This is about working together to find a better future for our game. Grassroots football does an amazing job. But volunteer coaches need support not barriers. Let’s make 2022 the year we make our young footballers the priority for our game, irrespective of the ability levels or backgrounds, helping wider communities in the process. I’d call on my fellow coaches to join the SFSA to help ‘ditch the Youth football tax’ and let’s move towards making football free for our young people.’

John Collins  who is acting as an Ambassador for the scheme said,” Every professional player started their career in Grassroots football and it is essential for the well being of  our game that we protect and nurture the whole game that we love.”

For further information on The SFSA please

Finally, please share your thoughts on any of my requests to Santa.

Let this be the start of a genuine non-secretive Joint Response Group.