On 21st October my last Sting identified flaws we can all see damaging to our game and asked you all if “you were happy”?
Thanks to all who responded, we were on a roll at the time.

That was then, though, before ‘stuff’ got in the way.

Sorry for the Radio Silence since.

Long story short, following treatment for a blood disorder my brief period of zero immunity was compromised by a few wee buggers and the resultant infections they masterminded temporarily got in the way of me doing my bit to solve the problems in Scottish football.

Fast forward and Big thanks to the NHS front liners who are inspirational, albeit constantly short staffed, and under stupid pressure from a failing and flailing system.

Truly Lions led by Donkeys and let down by those well paid to be in charge.

Now like Arnie but hopefully not, and never Boris, I’m back.

Lots of things have happened and we’ll talk about some of that below but the stark reality is not much has really changed.

Scottish football remains stuck in a self-interest-imposed rut and is collectively managing its own idiosyncratic, long-term structural decline.
And failing to address the list of actions that would and could make a real, long term difference.

There are many things that need to be done.

Fans see them and want action.
People inside the game see them too.

But when it comes to collective vision and action our game currently does not have the wherewithal to see the wood from the trees and change for the better from within.

Tracey Crouch’s imminent White Paper on shaking up football in England has identified that change needs outside catalysts and a new approach.
Its launch will see much discussion and some action on the iniquities and the gap between the leagues there.

The ex-Sports Minister’s well supported programme hasn’t featured nearly enough in our mainstream media up here but Google it and see the work that Tracey and ex pros like Gary Neville have done already.

It is a big deal.

There will be both intended and unintended consequences up here and we can expect the usual time delays and underinvestment of time, commitment, and resource.

Scottish Football has never more needed a hero or better than that, a bunch of them to become part of the movement for change.

The Scottish Football Supporters Association are a young organisation.

We are a ‘not for profit’ mouthpiece for fans who have been continually disenfranchised to the detriment of the sport, we love because fans should be at the heart of the game.
From day 1 our fan surveys have confirmed that we collectively want changes.
Fans can see the big picture and care about common good.

So if you are not an SFSA member please join us and be heard.

The more members we have the more our “Union of Fans” will achieve.
Membership will always be free.

1. Catch Up
2. Credit Where its Due
3. Henry Fighting Back and How You Can Help

1. What has Happened in Three Months?

The World Cup Has Come and Gone

Chile’s copper-bottomed attempt to replace the cheating Ecuador qualifying team at Qatar failed, The Home nation bussed in actors dressed as Qatari fans to cheer behind their goals, Infantino briefed the TV crews to feature him at least once at every game in his adopted new country, drink was suppressed at the 11th hour to the anger of Heineken and Anheuser Busch, plans for groups of three rather than 4 at the next World Cup were made to look stupid and will be ditched, we had a female referee team and lots of time added on, the Netherlands scored a wonder and quite bizarre free kick, Argentina won a final that those who have not seen many world cup finals declared the best ever despite a subdued first hour and Messi is a star, but we knew that anyway.

It was all on council telly too so less well-off families were not excluded and last week economic reports are crediting the World Cup with an uplift in Britain’s economy.

VAR Arrived with a Few Bangs Whimpers Confusion and Cynicism 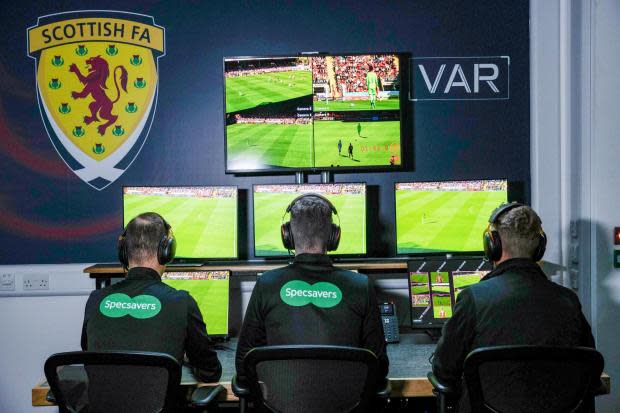 It had to come because without it we were in a minority in world terms but there have been teething problems some internal and some external.
Fans don’t like the time it takes.

VAR exposes bad laws and the confusion they create when levels of background ignorance exist.
Fans also believe some clubs always seem to get more than their share of the ‘benefit of the doubt’.
I think that is a reality north of Hadrian’s Wall.

Fan interaction between the SFA and its VAR team has not been good.
In fact the fans and what they think was never part of the launch process.

Is kids football becoming just for the middle classes?

Xmas has come and gone and many youngsters clubs have already noticed a turndown in numbers because of the cost per kid.
Are we in danger of losing a section of the young demographic because of the pressure on parents’ pound notes?
Early signs are that there is a slide starting and those most affected are our most important sub-grouping historically.

Kids football should be free.

All Roads Lead to Dundee.

Scottish Cup
The last time Dundee United played Stirling Uni was 1989 and Duncan Ferguson was starring for a young United side.

Tomorrow Saturday they meet in Scottish Cup 3rd round at Tannadice.
The students have just picked up the British Universities Premier title (North) and are a good side.
Stirling are the first Uni team for 50 years to reach this far and who can forget their traditional rivals Spartan’s run to a 5th Round replay against Berwick in 2015.
Anything can happen in the cup as Fergie said when he wished the students well.

This week we hear that the planned honorary degree planned for Sheriff Lindsay Wood from his old alma mater won’t happen.
He had been categorised and vilified as “A Rangers supporting sheriff who failed to discharge his responsibilities during the failed police Scotland investigation into the takeover of the club when Duff and Phelps sold assets to Charles Green”.
Last summer the stooshie was roaring and Sheriff Wood asked prudently to defer the award.

Professor Iain Gillespie the Dundee Principal and vice-chancellor had originally said “Sheriff Lindsay had made a great contribution in his field, echoing the university’s own mission to transform lives locally and globally”.

Dundee have subsequently confirmed that the honour offer is now toast.

And Sheriff Lindsay is being allowed to slip graciously towards retirement after Lord Carloway, our Lord Justice General ruled that no sanctions were going to be taken despite Lindsay’s officially declared mischief.

The same Lord did not say anything about the cost of up to £100 Million to the Scottish tax payer over the run up to and the sale of the assets of the club including compensation to the victims.

He is obviously too busy looking after his own.

If you voted in our Fans Awards 2022 then thanks.
If you didn’t then please vote next year.

All worthy winners. And thanks to the BBC who will be featuring them on Off the Ball.

I am especially pleased that Rose Reilly gets the Lifetime Achievement.
Her story is inspirational from playing as Ross Reilly, aged 7 for Stewarton to being banned sine die by the myopic Scottish Women’s Football Association to becoming a world cup winner.

Our winners will also be revealed across our Social Media channels via @scottishfsa.

3. Our Man with a Vision Needs Your Help

Henry McLeish like many others cares deeply about the future of our game.
With the gravitas of having been First Minister he was asked to produce two reports for the SFA.
Both are somewhere in the long grass behind the North Stand at Hampden because someone somewhere saw his proposals as a threat to their status, plans and probably revenue streams.

Well fear not, Henry has recently been working behind the scenes with a small team speaking to Scottish Football people and also liaising with the more substantial team behind the Tracey Crouch movement.

So first a fact then a request.

It is a fact that
Helping Scottish Football into a better place is everyone’s business.

Everyone’s insight, vision and opinion is relevant.
It is about identifying and addressing the big issues over time systematically and methodically.

And now the request.

What does Scottish Football need to do to change for the better?

I’m asking you on his behalf.

Let me know on email – it can be as short or as detailed as you feel happy with and I’ll pass your thoughts on to Henry.

It’s good to be back

As always feel free to write to me about anything happening and once again thanks for the entertaining feedback.
Makes a happy man very old!